system message
To ensure the best navigation experience, we use cookies on our site.
Learn more
OK

Spring snow and motorcycles in Crete

First day of Spring  and....Snow.
Crete always amazes with it's variety of terrain and climates. Setting off on the first day of Spring, the weather in Heraklion was 20C with sunshine. It didn't take long with the Honda CRF250L and the Yamaha XT660R to climb the mountains and find the snow.

From Heraklion, we went from Gazi and on to Krousonas village. From that point, we followed dirt tracks on to Nidas Plateau. Our return route was from the villages of Anogia Gonies and Tillisos.

Both motorcycles had no problems navigating the hard packed smoothed surfaced dirt tracks, on the route through Nida.
Nida plateau is grassy and flat. There are well marked tracks which are occasionally muddy but generally easy to ride.
On the Plateau of Nida, at a height of 1400 metres, we were in the shadow of the peaks of a snow covered Psiloritis. Typically, there is snow on the peaks of Psiloritis from November through till May.
The sun wa still shining and the temperature mild, even though there is a  very different weather climate and terrain. At this point we took a slight detour to follow more adventurous track and explore the area. 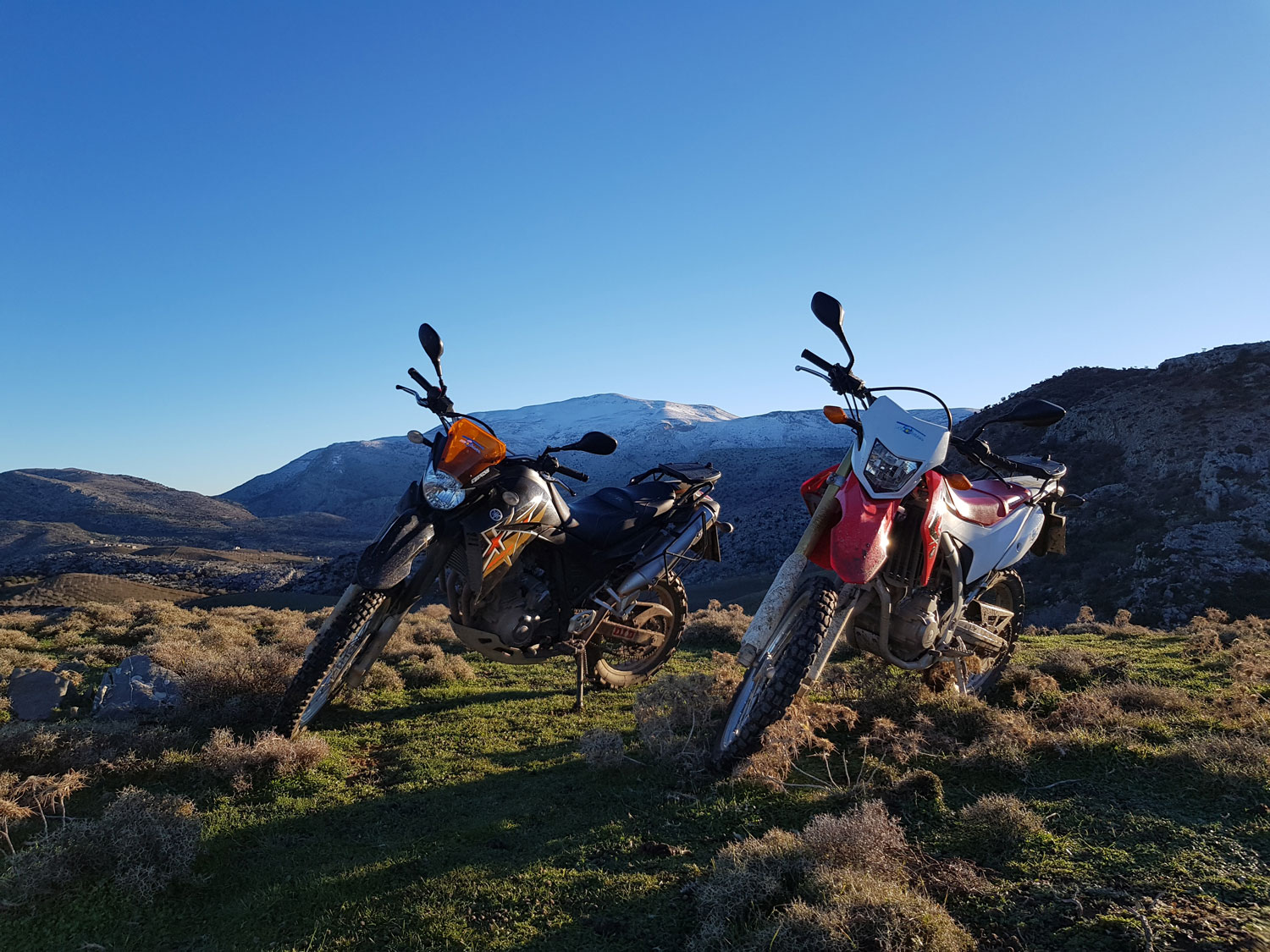 Continuing on our route we came across  a 'Mitato' or shepherd's hut.  The Mitata (plural of Mitato) are cylindrical vaulted stone buildings built only with stones and without binder. These buildings have been used for centuries in Crete by shepherds for shelter and as creameries. In the center of each dome like building is a hole to let smoke fire out, while inside there is usually storage for cheese. 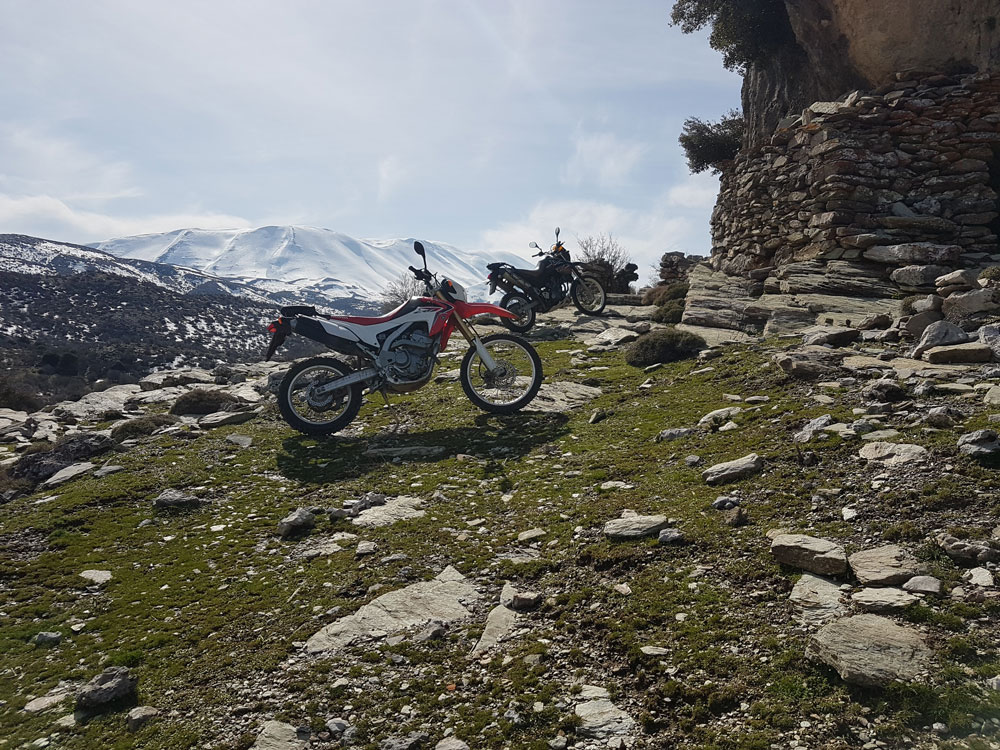 Our plan was to continue to the Observatory tower, however the road as of yet is still closed with snow. Impossible to pass we had fun trying. We returned via Anogia and Tillisos.
Our trip was a round trip of a total distance of almost 120 km's. As a self guided tour, it can be done mainly on the road with asphalt, but there is plenty of opportunity to explore the trails and goat tracks in the mountains as we did.
About the motorbikes:
The Honda CRF250L is a super fun small motorbike. Light weight and easy handling especially on some of the tighter technical parts of the trip.As a result, this bike is a real confidence builder.  The CRF's  engine will always forgive you no matter what mistake you may make. A really good motorbike for beginner riders  or riders in unfamiliar terrain.
The CRF was ideal for our ride out and similar day trips. Renters who plan longer journeys or longer distances on the highway may find it under powered. Although it has pillion foot pegs I also wouldn't recommend the Honda CRF250L if you intend on bringing a passenger on your trip.
This is an ideal bike for renters who are single riders looking to do short journeys with light off-road routes. The CRF is a fun and reliable choice.

The YAMAHA XT660R is a great all rounder Dual Sports bike. It is well suited to longer distances.  Suitable for any road, whether its a high way, mountain roads or light off-road. The engine with its 48 hp offers plenty of power and torque everywhere that you need it especially traveling on off-road. The XT660R gives you the sense of stability
and that its a sturdier motorbike compared to the Honda Crf250L. It is also heavier than the CRF so therefore far more work and muscle is required when tackling tricky surfaces.
The XT660R is a pure travel Bike ready any time to hit the roads of Crete with ease, comfort and reliability. Finally with a longer seat and an upright seating position, this bike is capable of sitting two, and more suitable for covering greater distances as you tour Crete.

See these models and more available for rent in Crete.

For more information about this tour or others when booking your motorcycle, contact Aris, or Stelios for routes and tour tips!